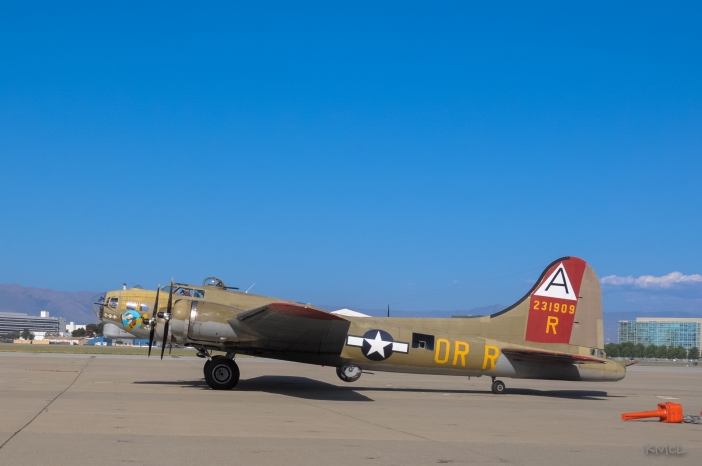 When we were visiting friends in the Bay Area of California the “Wings of Freedom Tour” appeared at nearby Moffett Field on one of their many scheduled shows this year. It was a bright, breezy day perfect for wandering around the tarmac and poking cameras into and around the four vintage fighter planes from WW II. Besides the B-17 Fortress there was also a B-24 Liberator bomber, a B-25 Mitchell bomber and a TP-51C Mustang fighter plane.

I ended up spending most of my time taking photographs of the B-17 Flying Fortress.  The “Wings of Freedom Tour” allows visitors to walk out onto the apron to explore the exteriors and interiors of the bombers. For an extra fee they will also take passengers on a 30 minute flight.

As I was wandering around the plane I noticed a petite lady in a ball cap and pink jacket heading past the tail of the aircraft pulling a small black carry-on rolling bag.  She stopped by the steps of the rear door, parked the bag and pulled out a small white towel.  I politely asked what her role was on the team, to which she replied “copilot on this tour”.

This lovely lady introduced herself to me as Mary and explained that she has been flying for close to 40 years and is certified on everything from small single engines to jets. In fact she works for the FAA as someone who certifies other pilots.

I did not get to meet the other crew member and pilot, but he looked just as you would expect the pilot of a vintage warbird to appear.  White hair blowing in the wind, big mustache, tanned face and aviator glasses.  When it came time to prepare the plane for flight he drafted me (in the green shirt and tan cap) and another to help turn the engines over (for compression?) by pulling on the propellers.  It’s a lot harder than I would have imagined. 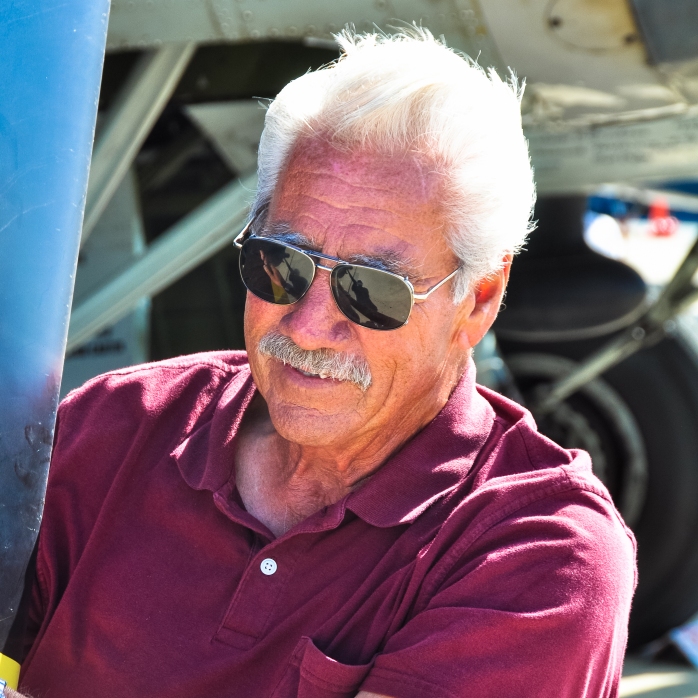 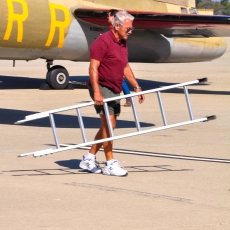 Pilot Preparing for Take Off – removing the ladder!

Drafted to Turn the Engines

It Takes Two to Turn the Props

The Flying Fortress has four 1200 HP Wright-Cyclone engines that can pull the plane up to a maximum of 250 miles an hour with a maximum range of 2400 miles. (Not sure if it can make 2400 miles when flying at maximum speed!). 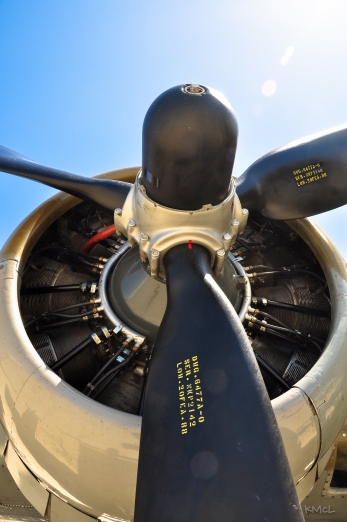 The wingspan is 103′ 9.3″ and the plane is 74′ 9″ long.  There were 12,731 of this particular design built. The prototype of the series was introduced in 1935 at Boeing Field, South Seattle, WA and the first B-17 went into combat in 1941 as a British RAF high altitude bomber. The later models came with modified tails that were enormous, designed to provide better stability and control, specifically for aiming bombs from far above the target.

The front of the bomber sports a plexiglass nose for the bombardier and his navigation table, which is behind him. Just below him is a later defensive addition known as the “chin turret”; it comes complete with a lethal set of machine guns. 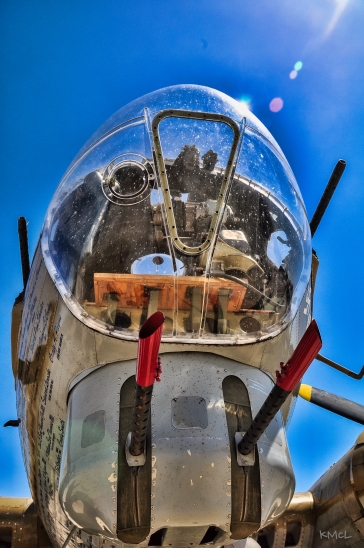 In the midsection there are two machine gun positions manned by “Waist Gunners”, one on each side slightly offset to give them both room to maneuver in the tight space. 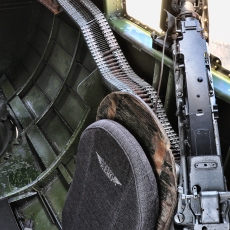 Under the belly of the bomber, stuffed into a “Ball Turret” is another machine gunner lying on his back, legs up, with the machine gun controls between them. This is a very tight space and I can’t imagine what it must have felt like suspended over a target with bomb flashes below you and flack coming towards you.

And finally, at the very rear of the aircraft, tucked into a spot under the huge tail, sits the “Tail Gunner”. This position is considered one of the most important as it provides the  defence from attacking fighters that generally came at the bombers from behind. The gunner sat on his legs in a kneeling position, connected to an oxygen supply and intercon, and ran the twin machines guns poking out of the back of the plane.

Inside and just behind the cockpit lies the bomb bay which can house up to a 4,000 pound load of bombs. The bombardier sat on a seat in the plexiglass nose cone where he had maximum visibility and accuracy sighting his target with the use of a Norden Bombsight (TED Talk). (Take 15 minutes to watch the TED Talk by Malcolm Gladwell)

Passing Through the Bomb Bay

Bomb Sight in the Nose Cone

One of the great things about being at a Wings of Freedom Tour is that the planes are in full working order and provide the opportunity for enthusiasts to go for a 30 minute flight. The 13 ton Flying Fortress hasn’t been modified for the comfort of the paying passengers – it provides a very realistic utilitarian, cramped, bumpy ride accompanied by the strong smell of aviation fuel and burning rubber.  And it is very noisy.

Taxiing for Take Off

From the edge of the apron visitors can watch the Fortress lumber down the runway, lurch into the air, make a pass overhead and return half an hour later to drop off and pick up passengers.

Mary in the Copilot Seat 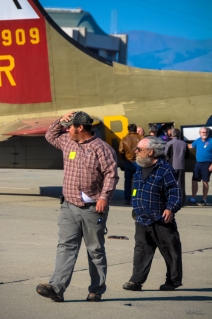 Amazing Experience for Many

A few interesting notes about this particular B-17G

Serial number 44-83575, was built too late to see combat. It was subjected to the effects of 3 different nuclear tests (not sure how that was completed), and then left for 13 years in order for it to dissipate the remnants from the explosion.

It flew for 20 years as a water bomber under the name “Yucca Lady” before being sold to the present owners, The Collings Foundation. Tom Reilly Vintage Aircraft took on the project to restore it back to the original wartime configuration, after which the plane was renamed the “Nine-O-Nine”.

The “Nine-O-Nine” is famous in its own right having made 18 flights to Berlin between February 25, 1944 and April 1945. In those 1,129 hours she dropped 562,000 pounds of bombs and suffered from a lot of flak damage. After the war the plane was flown back to the United States, complete with 600 patched holes!